Free apps represent an interesting segment of the Atlassian Marketplace. Naturally, free apps make up a smaller percentage of the Marketplace than Paid (30% vs 70%). However, Free apps are a fascinating mix of integrations, lite versions, apps that will be made paid in the future, and less feature-heavy alternatives to larger paid apps. 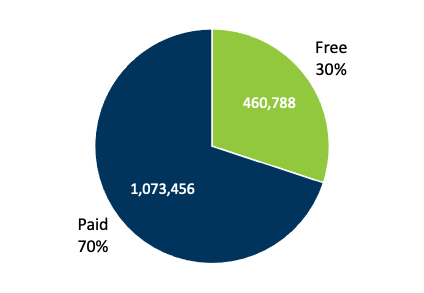 No obligation to do anything with it…

Where They are Now

In our original report, we highlighted the 10 fastest growing free apps on the Atlassian Marketplace from November 2018 to April 2019. At this point in time, we predicted that a number of these apps may become paid 3rd party apps in the future. However, with over 2 years more insight and data available to us we’re going to look at what has actually happened with them.

The top app of our original report was Clockwork Automated Timesheets by HeroCoders. Since April 2019 HeroCoders has modified their model with Clockwork, transitioning this app into a paid version while introducing a free version.

Instead of just making Clockwork paid and potentially forcing a number of smaller customers off of their app, HeroCoders have ensured that they can continue to provide a quality, feature-heavy application through their Pro version while also maintaining flexibility with a Free option.

The data shows that this has definitely been successful with Clockwork Pro having 1042 instances and Clockwork Free with 4765. Both also grew significantly over 2021 by 27% and 48% respectively.

As a free app Power Admin grew rapidly and clearly made gains over its main competitor feature-wise, Admin Toolbox. Power Admin went paid in May 2021 and although its growth has generally stagnated since then, it has built up such a large customer base that its strategy can undoubtedly be regarded as a success.

This model is generally beneficial for all–vendors get to build up their market share before charging a fair price given the costs of developing these products. Meanwhile, customers get to benefit from having a quality product for free for years. App vendors looking to potentially look for an edge over their competitors should definitely look at Power Admin and Botron as an example of how to put their products on the market. 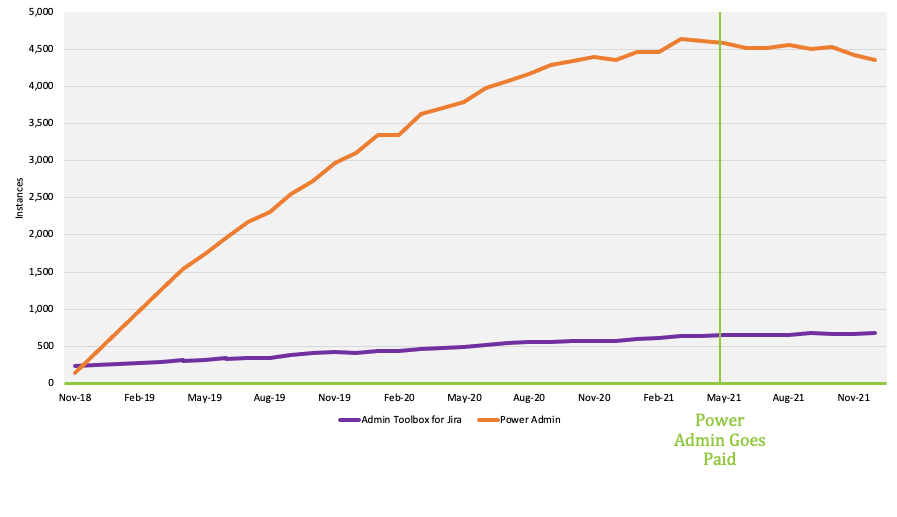 These two Microsoft Teams integrations were incredibly well made and popular-SoftServe actually won the “Marketplace Vendor of the Year in SaaS Integration Fastest Growth” award from Atlassian at the Partner Awards in 2019, partially for the success of these two apps.

However, these apps were so well successful and key to the Atlassian products they run on that Atlassian actually acquired these apps meaning their features are now native functionality of Confluence Cloud and Jira respectively. There is perhaps no better indication of an app’s quality and desirability to the customer that Atlassian decides it cannot go without it and makes the decision to acquire it.

With the rate at which GitHub for Jira was growing it is unquestionable that it made sense for Atlassian to bring the app under its control, especially as since then its growth has even accelerated (to over 92,200 instances).

This, combined with developments such as Atlassian’s ‘Open DevOps‘ speaks to Atlassian’s growing willingness to integrate their products with organizations that could be regarded as competitors. By doing this Atlassian is showing that their priority is always the customer and that whatever tools they are using, Atlassian wants to make their experience as smooth and efficient as possible.

While over 2018 to 2019 Adobe XD for Jira (5th) outperformed Figma for Jira (8th), more recently Figma has been going much stronger.

The key difference here seems to be that Figma is much more suited as a product than Adobe to work in the cloud. While Adobe XD requires users to sync to the cloud, users actually work in the cloud on Figma. This has notable differences when using the two products in Jira Cloud. For instance, while Figma for Jira has ‘live embeds’ that update in real-time to reflect changes made in the design file, users must go to Adobe XD itself to see the most up-to-date design versions.

Figure 4: Adobe XD for Jira vs Figma for Jira

Sentry for Jira is another cloud integration that was going well in 2019 and is still going strong now. Sentry for Jira grew by 42% over 2021 reaching over 8200 instances.

Like with GitHub, Atlassian is ensuring their customers are easily able to use best-of-breed tools like Sentry through Open DevOps. Jira deeply integrated with Sentry and a host of other tools, ensuring developers using Atlassian products can always use their favored tools for specific tasks.

Commit Graph for Bitbucket Server was a surprise entrant to our initial list but given wider changes to the Atlassian ecosystem, it has largely stagnated since then.

Commit Graph for Bitbucket Server only grew by 1.75% over 2021 which is understandable (even impressive) given that Bitbucket apps overall shrunk by 7% over this period. The relative stagnation of Bitbucket is (we believe) largely due to Atlassian’s increasing openness and acceptance of 3rd party development integrations that customers are increasingly keen on using.

Furthermore, since Atlassian announced the end of life of Server in October 2020 the demand for new Server applications has naturally been severely hit since new license sales are not possible and increasing numbers of users are migrating off of the platform. This has led to an overall shrinkage of Server only apps by 5% over 2021. Again, this makes Commit Graph for Bitbucket Server’s growth of 1.75% over 2021 look impressive.

Commit Graph for Bitbucket Server is a quality app, especially given that it is free, however, market conditions over the past few years have made things increasingly difficult for it. 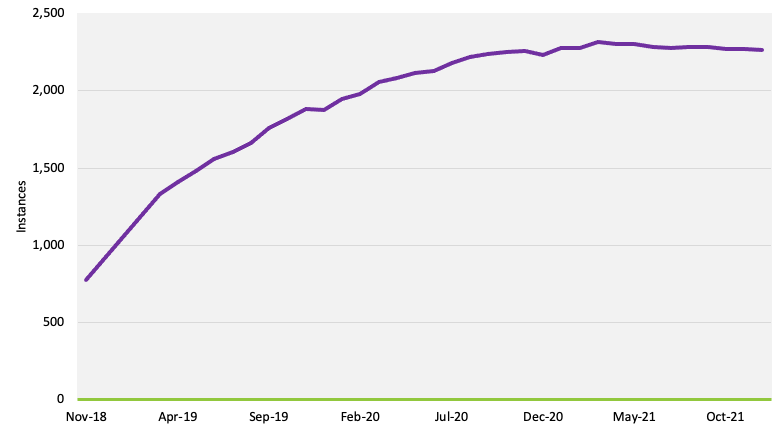 Miro for Confluence is a 3rd party integration that has actually gone from strength to strength since remote working became more popular in early 2020.

As a virtual whiteboarding tool, Miro is essentially tailor-made for remote/hybrid working so its growth explosion (shown in Figure 6) since March 2020 is not a surprise.

Miro for Confluence has shot up from around 2000 instances in March 2020 to over 10,000 today–unlike Commit Graph for Bitbucket Server which has had market conditions working against it, Miro has certainly had things go its way over the past year or so. 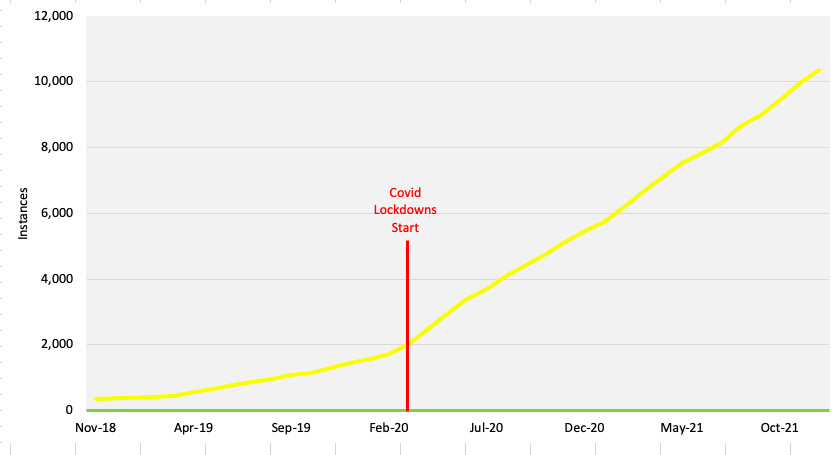 These are the fastest moving free apps over 2021:

If you have any questions then get in touch with us at hello@blendedperspectives.com.