With the release of their 2022 Annual Developer Report, Stack Overflow have unveiled a number of interesting observations across the world of technology. Stack Overflow’s survey collects a range of metrics from over 70,000 developers, including information on experience, pay, roles, and favored tools.

For those of us working in the Atlassian ecosystem the data on tools made for especially good reading with all of Atlassian’s major products leading the way in their respective fields.

Trello, Bitbucket, Confluence and, particularly, Jira, showed incredibly strong results with developers highly favoring them over their competitors and using them in much greater numbers.

Here we’ll recap all of the key findings from Stack Overflow’s Developer Report, mainly focusing on Atlassian’s results while also touching on a number of other findings we found interesting.

Looking at what Stack Overflow refers to as “asynchronous” tools, we can see that Atlassian truly dominates the fray. By asynchronous Stack Overflow mean that these are collaborative tools that don’t require users to be at the same (virtual) place at the same time like they would with Slack or Zoom for instance.

Jira (which Stack Overflow, we think, mistakenly refers to as Jira Work Management despite the two being different albeit closely linked products) was the most used with 54% of developers saying they regularly used it over the past year. Impressively the two next closest products were also Atlassian tools: Confluence and Trello.

Jira’s closest competitors were Notion, Asana, and ClickUp with their respective usage rates just further highlighting the dominance Jira has in this space for developers. 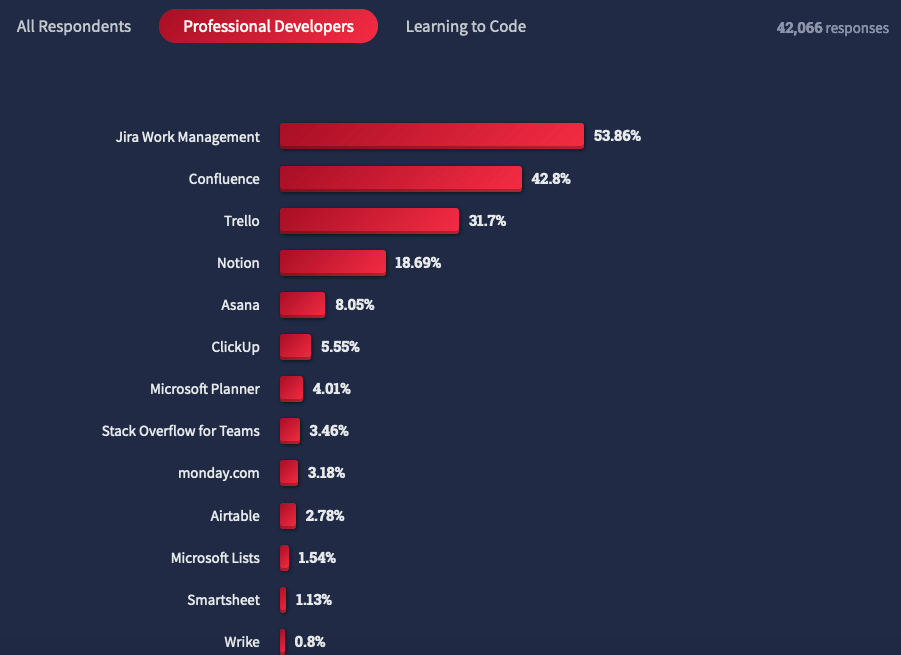 Jira was also reported as the number one tool that developers who weren’t using it wanted to use. Despite already dominating this market, Jira seems likely to grow further as despite it already being the most popular tool it is also the most desired tool. 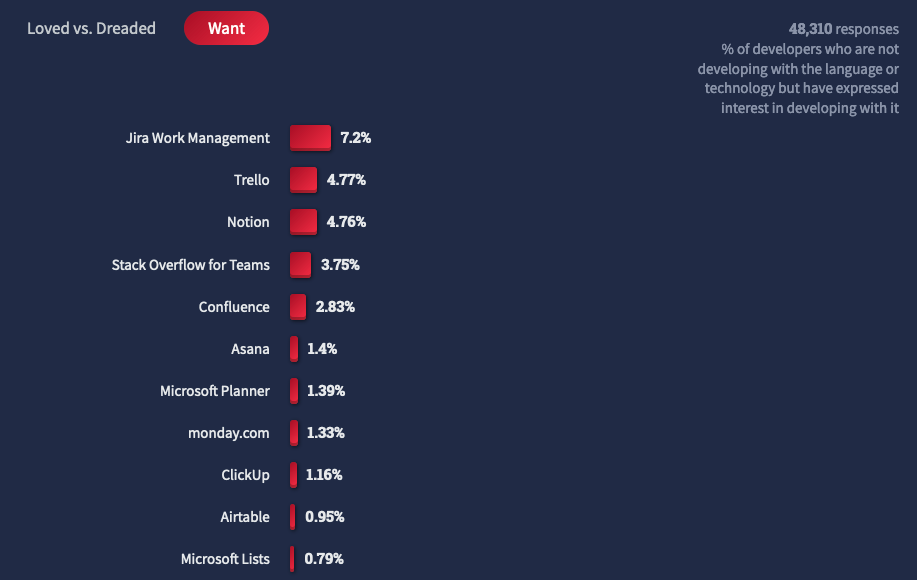 Furthermore, when it comes to how much developers enjoy using these tools Jira also comes out well. 56% of developers expressed that they “Loved” using Jira, higher than the respective rates for ClickUp, Asana, Wrike, and monday.com.

Interestingly, especially given Stack Overflow’s misspeak in using “Jira Work Management” in place of “Jira Software”, the launch of Jira Work Management in 2021 will likely lead to Atlassian’s further expansion into the non-developer space.

As the data shows, the majority of developers are using Jira and or Confluence/Trello to organize their work. But, the usage of these products among non-technical teams is not as high. This is why Jira Work Management is likely to be such a big game changer for Atlassian. A more simple and user-friendly tool than Jira, yet still closely integrated, Jira Work Management will let business teams use a highly sophisticated yet user-friendly product that is strongly integrated with the tools their developers are using.

As Stack Overflow’s survey shows, development teams are very rarely using tools like monday.com or ClickUp. However, since business teams and technical teams collaborate on the same work it makes sense that they work on integrated tools. Since Jira Software can be overly complex for non-technical teams, utilization of Jira Work Management for business teams in conjunction with Jira Software for technical teams would be the logical step forward for most organizations.

With Atlassian’s push to the cloud continuing, AWS came out as the most used and most “loved” cloud platform.

Figure 3: Most Popular and Most “Loved” Cloud Platforms

Slack is incredibly popular with developers. 58% of professional developers reported that they used Slack regularly (more than Zoom, Microsoft Teams, and Google Chat) with over 71% of these users reporting that they “Loved” it. 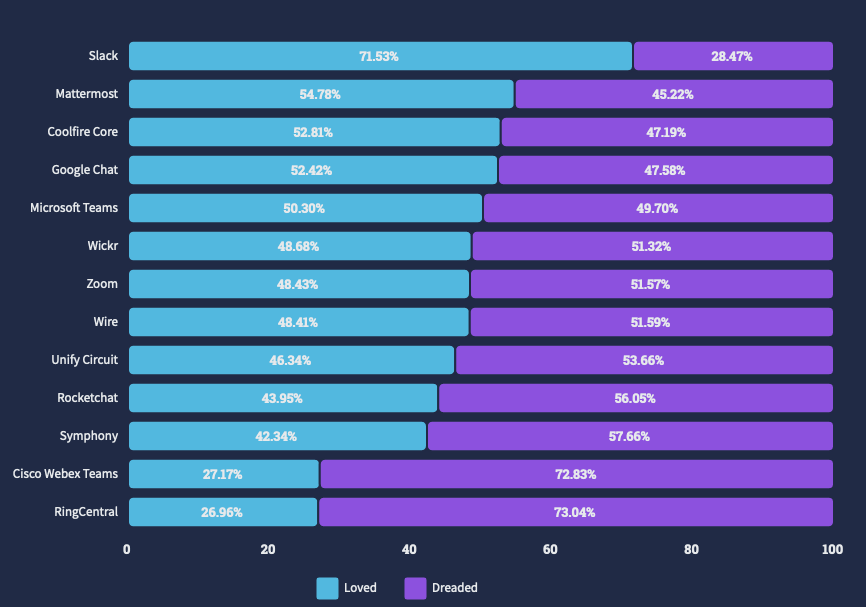 Perhaps unsurprisingly, for the 10th year in a row, JavaScript was reported as the most used programming language with 68% of developers using it regularly. It proved to be reasonably well “Loved” with 61% of developers stating this.

If you want to read the findings of the survey in full then you can do so here.

Please get in touch with us if you want to learn more about any of our unique offerings.