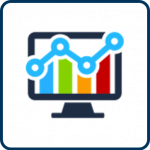 One of our unique offerings at Blended Perspectives is our Marketplace Analytic Research Service (MARS) database of Atlassian Marketplace 3rd party apps.

While many Atlassian Partners make their own apps, we believed that we could bring greater value to our customers and the Atlassian Community as a whole by creating a quantitative and objective database covering every facet of the Atlassian Marketplace.

MARS contains a vast array of data from instances, reviews, and pricing, to platform, app growth, and version releases. This is all tied together at the top level through our meaningful app categorization in which, for every app with over 500 instances, we carefully assigned our own categories based on the primary functionality of each app. We do this instead of using Marketplace app categorizations which are somewhat meaningless due to vendor self-selection. This means that MARS can give us a completely unique perspective into which apps are really excelling and driving forwards in the Marketplace.

Every month we like to highlight the app that we think has stood out the most over the previous month, which in May was Power BI Connector for Jira by Alpha Serve!

One of the fastest-growing apps on the Atlassian Marketplace this year has been Power BI Connector for Jira by Alpha Serve and it’s no surprise why.

Offering simple, powerful, and secure integration between Microsoft’s Power BI and Jira, Power BI Connector has proven to be a must-have tool for all organizations looking to analyze their Jira data in Power BI.

For organizations using Power BI to run complex reports, models, and dashboards based on their Jira data, Power BI Connector lets them quickly import any and all data into Power BI, including custom fields, history, worklogs, sprints, 3rd party app data, and more…

As we can see from Figure 1, Power BI Connector for Jira has impressed the most out of these three over the past year. With the highest average rating (although it’s worth noting that both eazyBI and Power BI Jira Connector also have extremely high ratings) and an incredibly high growth rate of 82% this year, Power BI is truly excelling. 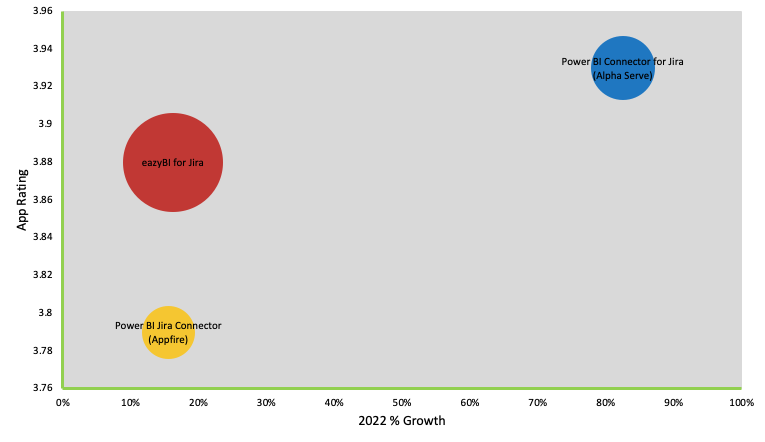 Power BI Jira Connector by Appfire (originally a Bob Swift application) has been around for a while and has been showing consistent solid growth. For years it has been the leading Power BI/Jira Integration tool but recently Power BI Connector for Jira has truly taken off. In Figure 4 (which is powered by Old Street Solutions’ Custom Charts for Jira) we can see that from late 2021 onwards, Alpha Serve’s app has skyrocketed.

Power BI Connector for Jira is an incredibly feature-rich app that can prove invaluable to users looking to analyze their Jira data in Power BI. With its depth of functionality and user-friendliness, we expect to see its strong growth continue into 2022.

Congratulations to all involved at Alpha Serve!

Exporting data from Jira to Power BI using Power BI Connector for Jira is incredibly easy and doesn’t require any Jira admin or coding abilities. Using its comprehensive, native, and user friendly interface, any Jira user can create data sources (based on their access).

Users can schedule a refresh of their Jira/Power BI data so that they can be certain that the data they are working on in Power BI is fully up to date.

Users can build sophisticated reports in Power BI with their Jira data. Convenient filtering options in Power BI Connector for Jira ensures that data exported into Power BI is precise and relevant while reports can be based on a wide range of data including: custom fields, history, agile and much more…

Permission settings in Power BI Connector for Jira ensure that data sharing is secure and controlled. With permissions it is possible for Jira admin to make the app available for relevant Jira users or groups only and at the same time, users are only able to select from the data they have access to in Jira. If the data source includes fields or projects that are not available in Jira, then this user will not see any of this data in Power BI.

Each user can create multiple Data Sources based on the data sets that are needed for export. It is also possible to share the data sources with other Jira users, to manage data export and ensure proper data extraction, and improve intra-team collaboration.

Jira data can be transformed easily according to the reporting needs with Power Query.

Power BI Connector for Jira has been one of the fastest growing apps on the Atlassian Marketplace over 2022 and when you see how easy it makes analyzing key Jira data in Power BI it’s no surprise as to why this is the case.

It’s success this year is a great credit to all of the fantastic work being done at Alpha Serve and we look forward to seeing how it develops going forward into 2022.

If you have any questions about MARS™ or any of our unique offerings then please get in touch with us at hello@blendedperspectives.com.