Celebrating 10 Years of the Atlassian Marketplace

This May, the Atlassian Marketplace turned 10 years old 🎉

Since being launched in 2012 the Atlassian Marketplace has exploded into an incredible hub of innovation with over 5,000 apps, over 1,000 vendors, and 1.6M installs. This is a remarkable feat and speaks to both the excellence of the Atlassian platform and the brilliant work that the Marketplace app vendors are doing to meet the needs of Atlassian’s growing customer base.

To celebrate the success that the Marketplace has had over the past decade, Atlassian will be donating $5 to Raspberry Pi Foundation for every app installed on May 31st. We encourage all Atlassian customers to make the most of this great initiative!

At Blended Perspectives we hold a very unique and interesting position in relation to the Atlassian Marketplace. As an Atlassian Platinum Solution Partner, who is not a Marketplace Partner, we don’t have any conflicting interests in this space and can be relied upon for objective assessments of the best tools available on the Marketplace to suite a particular customers needs. This objective approach is most powerful when coupled with our Marketplace Analytics Research Service™ (MARS™).

MARS™ is our database of Atlassian Marketplace 3rd party apps and contains a vast array of data from instances, reviews, and pricing, to platform, app growth, and version releases. As a quantitative database covering every facet of the Atlassian Marketplace, MARS™ lets us combine our qualitative assessments of apps with the latest up to date information on a range of data driven metrics.

10 Years of the Atlassian Marketplace

To celebrate this huge milestone for Atlassian and everyone involved in the Marketplace, we are excited to reveal the fastest growing Marketplace apps since November 2018! The apps featured here have done incredibly well in sustaining interest and continuously innovating their products over this three and a half year period. While some amazing products have of course been released since November 2018, here we will be highlighting apps that have been around since this MARS™ start date.

Congratulations to all who have been involved in the Atlassian Marketplace over this incredible 10 year period!

Across every metric, the Atlassian Marketplace has boomed since November 2018.

As Figure 1 shows, the number of apps on the Marketplace has increased from a little over 3,000 in 2018 to over 5,000 today. Furthermore, this isn’t just about an influx of small apps with small install bases–the number of “500 Club” apps (apps with over 500 instances) is up 66% while the number of total installs is up 64%.

When we look further into this Marketplace growth data we can see that the bulk of this growth has, naturally, come on the Cloud. 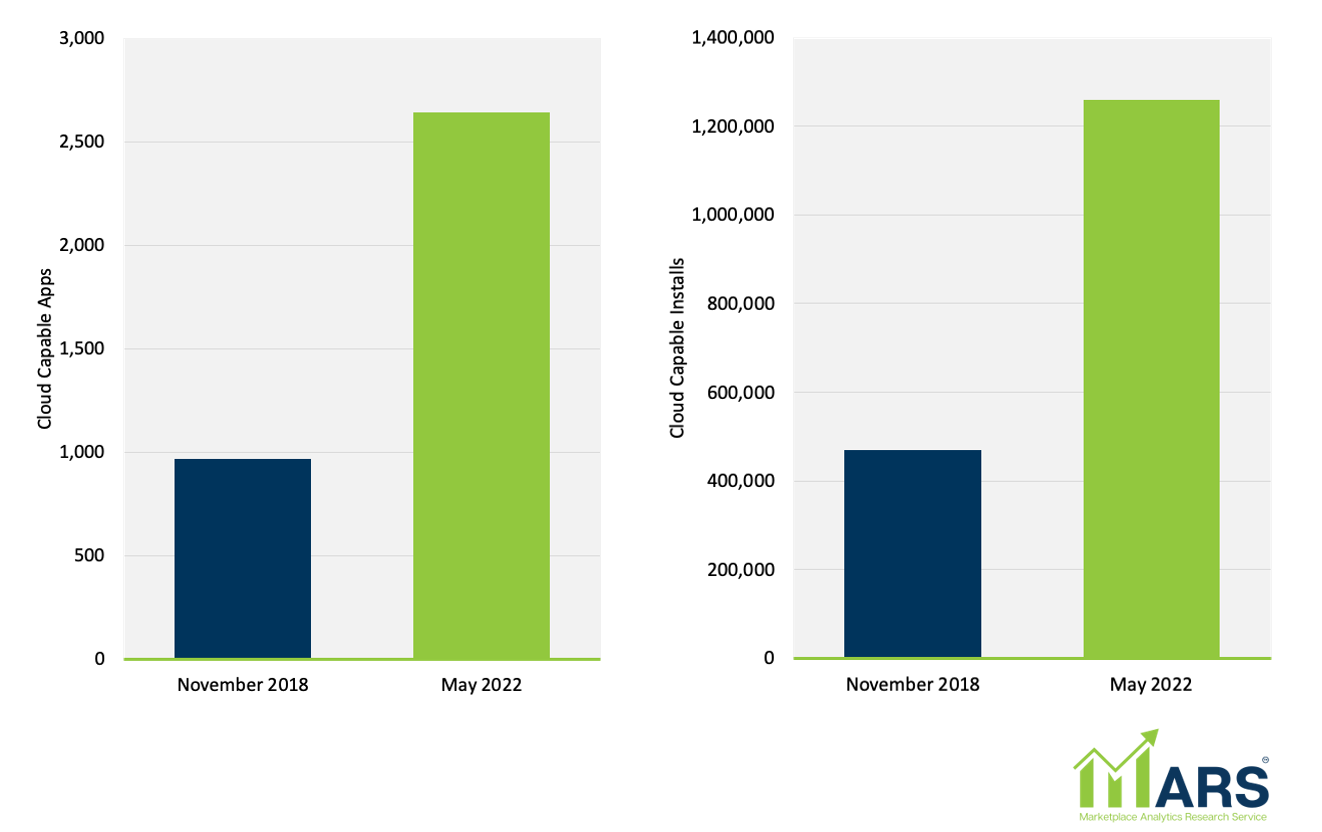 With Atlassian’s Cloud platform growing at an incredible rate, Marketplace vendors have responded to customer demands in increasing both the availability of Cloud apps in their portfolios and the potential functionality of their Cloud products.

With Cloud Migrations accelerating and increasing numbers of larger Atlassian customers migrating to the Cloud this is a trend we expect to see increase over the coming years.

In Figure 3 & 4, we can see what the biggest apps were in November 2018 and what the largest apps are now.

Clearly a few things stand out–first and foremost the growth of draw.io has been remarkable over this 3.5 year period. Over this time span draw.io has increased its instance count by over 31,000 (139%) and has cemented its place as the largest 3rd party app by some distance.

In the Diagramming space it has blown its main competitor Gliffy out of the water–while in November 2018 there was less than 2,000 installs between them it’s now over 33,000.

To put draw.io’s monumental success into perspective, it has grown by nearly twice as much as the next fastest growing app over this period: Xray. 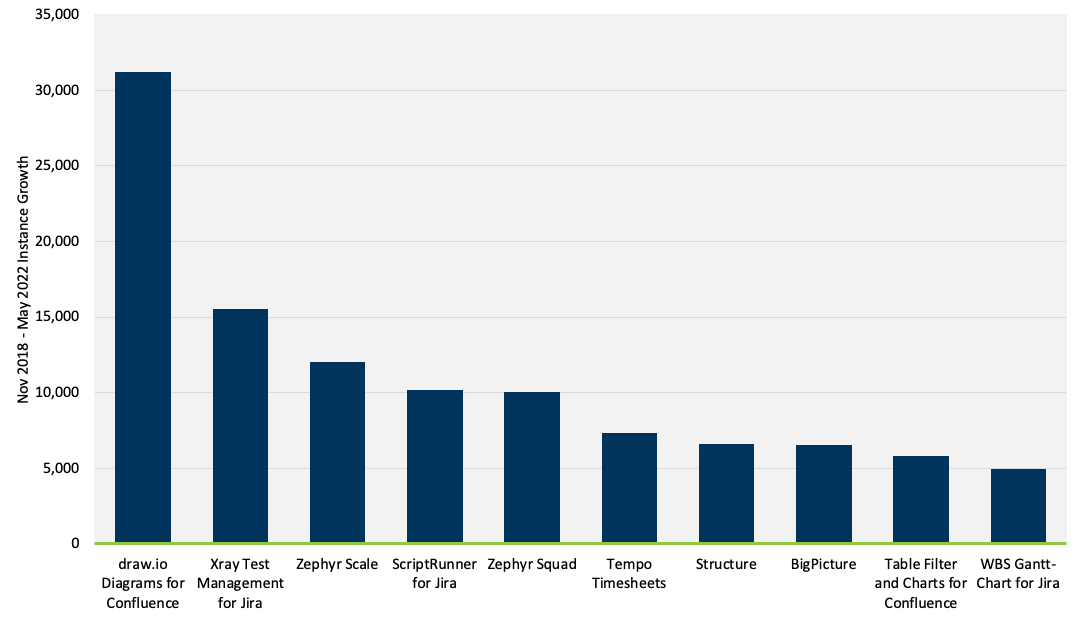 The success of the major players in the Testing space is very interesting: Xray has grown the most of the three but Zephyr Scale and Zephyr Squad have also both grown by over 10,000 instances.

ScriptRunner has continued to do well in an area that has seen its growth stagnate somewhat recently, while in the Planning space Structure and BigPicture are neck and neck. WBS Gantt-Chart also had a great few years in the Planning category, growing by 5,000 instances. Tempo also grew immensely over this period and further solidified itself as the dominant force in Time Management. Finally, Table Filter and Charts for Confluence, the only other Confluence app along with draw.io to feature, really established itself as a must have reporting tool in every Confluence instance.

Just missing out on this list but definitely worth mentioning due to their incredible growth rates off of small bases are Deep Clone for Jira by codefortynine and Power Admin by Appfire (Botron). These apps grew from 332 and 137 installs respectively–to 5,000 and 4,400–translating to percentage increases of 1400% and 3000%! We hope that this provides inspiration to all app makers out there with smaller apps that in a year or two their apps can also be hitting these incredible heights.

In terms of Free app growth over the lifespan of MARS™, the leader has been Timesheet tracking for Jira by Touchdown. The app is paid on DC and Server and free on Cloud, but since most growth is likely coming from the Cloud we like to consider it (along with apps following a similar model) a free app. Along with Timesheet tracking for Jira, external integrations have dominated over the past 3.5 years. Figma and Adobe XD, as we have noted before, have blown Zeplin and InVision away in terms of their growth in the Requirements Management space. Meanwhile, Miro has been growing fantastically, its collaborative whiteboards ideally suited to remote working. 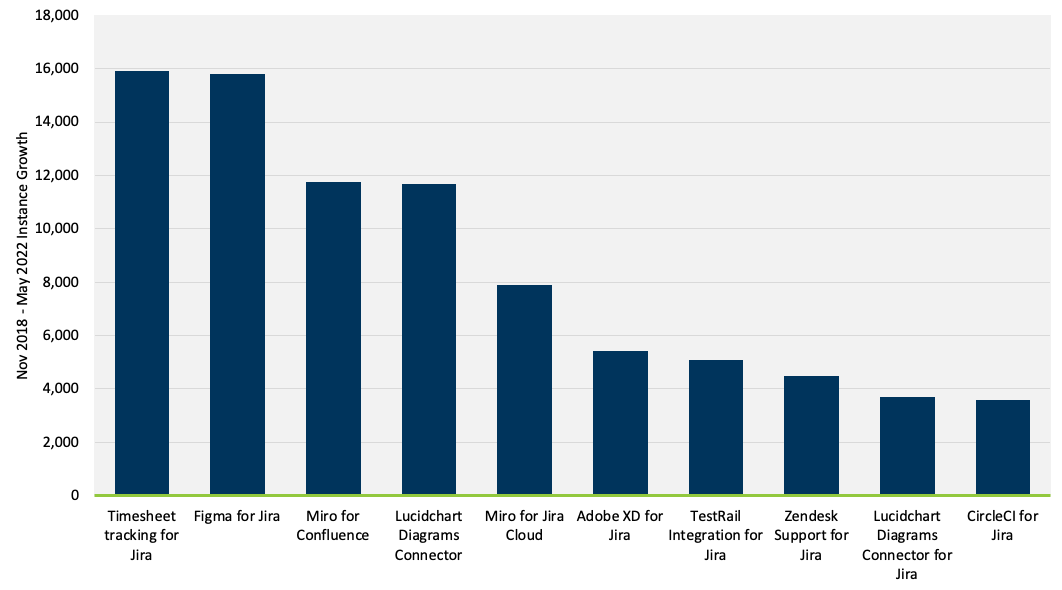 Not only is the Atlassian Marketplace an incredible source of value to all of us who use Atlassian products, it is also an awesome community of organizations, teams, and individuals who come together with a single purpose of making using Atlassian tools better.

As we saw recently at Team ’22, all of us in this community have the same goals at heart and are always willing to help fellow members out in whatever way we can. Here’s to 10 more years of the Atlassian Marketplace!

Congratulations to all of the apps and vendors featured here!