In our “Category Report” series of blog posts we break down individual categories and look into them in a bit more depth. Today we will be looking at Diagramming apps. In MARS Diagramming apps are apps that bring diagramming and graphing functionality into Jira and Confluence

Diagramming is one of the larger marketplace categories with 81,000 instances, 94% of which are on paid apps. With the market share for paid diagramming apps at 94% (versus 64% for the marketplace as a whole) we can see that when it comes to diagramming the overwhelming majority of users believe that the added investment into a paid product is worth it. 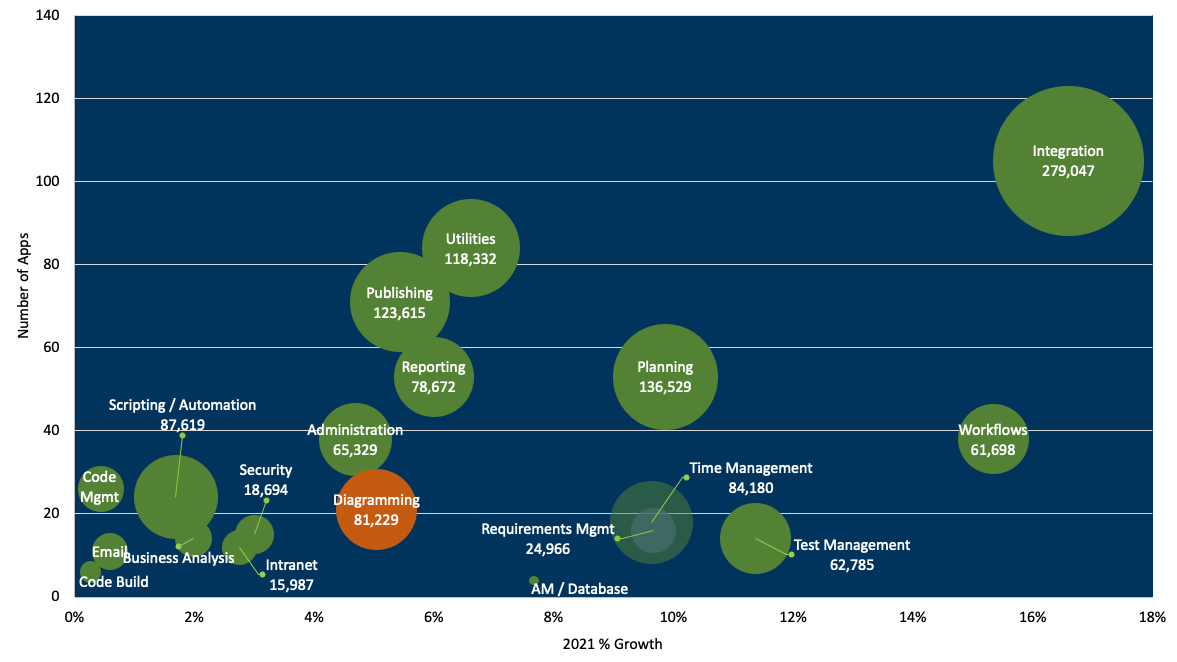 The dominance of paid diagramming apps largely comes through Gliffy and, most importantly, //SEIBERT/MEDIA‘s draw.io which has 40,000 active installs. Impressively, while also being the largest diagramming application, draw.io for Confluence is also the fastest growing in percentage terms with an incredibly impressive 10% growth just in 2021! However, despite draw.io‘s spectacular install growth, Gliffy, as it averages around 800 users per instance versus a little under 400 for draw.io, still has more users. 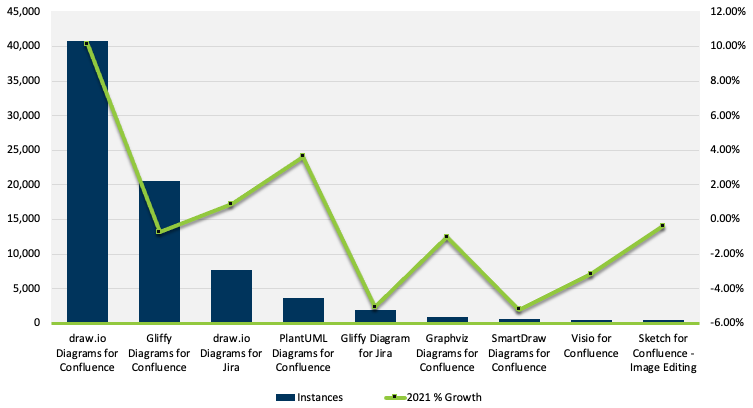 In terms of a fully featured diagramming apps built for Jira you have a direct choice between draw.io and Gliffy. Both are quality apps and, while both will serve you very well no matter what, depending upon your unique circumstances one may suit you better than the other. Draw.io was originally a cloud tool that interfaced to Jira; Gliffy originated in Atlassian. Both can be installed behind the firewall, unlike cloud-only integrated tools, such as Lucidchart, which like other integrations, is excluded from this report.

One newer aspect of MARS is our ability to measure application ‘velocity’. By ‘velocity’ we refer to the number of releases that an app has had over a certain period. In this regard, Draw.io is comparatively impressive: in 2020/21, Draw.io shows 45 releases, versus 11 for Gliffy. We assume this conveys investment in bug fixes and improvements and therefore in this regard Draw.io is excelling. 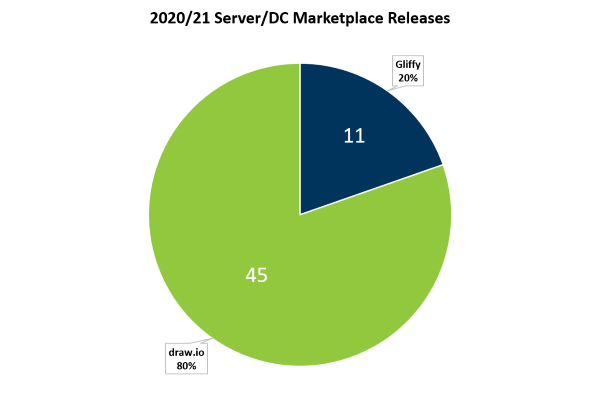 When comparing the features of the two apps each has a number of advantages over each other. Many believe that Gliffy lets users position and edit shapes more easily and accurately while it also lets you pin versions, find diagrams faster with in diagram text search, share up to date links outside of Confluence, and mimics Confluence’s draft and publish system. However, draw.io has a larger shape library, more extensive exporting/importing functionality, access to a free desktop app linked to Confluence, and the ability to include multiple pages in the same diagram.

We think that you should try them both out–they are both excellent apps and the best way to find out which one suits your individual needs better is to give them a try. The most important thing, however, is that if you don’t have a diagramming app in Confluence then get one! Diagramming is key to any Confluence instance and, draw.io or Gliffy, you’ll be much better off with one then without one.

In terms of non-native diagramming functionality for Confluence, Lucidchart’s Diagrams Connector is also an option. With over 22,000 instances Lucidchart has more installs than Gliffy and is a quality diagramming tool in its own right, as is demonstrated by Lucidchart’s impressive 2021 13% growth (beating even draw.io’s impressive 10% growth). The connector embeds Lucid diagrams onto Confluence pages which can be edited straight from the page itself. If you already have Lucidchart then this will likely be the most natural and cost effective option for your organization. However, for a smoother diagramming experience in Confluence, Gliffy and draw.io are more suited for most users’ needs.