Appfire + Project Configurator for Jira: All Roads Lead to Rome

Appfire acquires Project Configurator for Jira, In the end it all leads back to Cloud

On November 1st Appfire announced their acquisition of Project Configurator for Jira (PCJ) from Adaptavist. Whilst this is a tale of shifting app ownership, it will become clear that these moves have much to do with the ever-accelerating movement from on-prem to Cloud. All will become clear as we lay out the evidence.

Using the power of our Marketplace Analytic Research Service (MARS) we will be commenting on what the implications of this development are. With MARS (our database of Atlassian Marketplace 3rd party applications) we are able to provide uniquely objective and data driven insight into the Marketplace. You can learn more about MARS here.

Our initial reaction to this acquisition was that it raised concerns about why Adaptavist have shed quite a number of quite large app products over the last year or two, could they be exiting the app space? To put this into context, Adaptavist CEO Simon Haighton-Williams stated that this is not the case and commented in a social media response as follows:

“Well if you want it from the horse’s mouth – we’re far from exiting the app business … As you know we’ve a whole bunch of apps, and in fact, there’s new stuff lurking in the pipeline… Our focus is always on our client’s success and building a great company for our people to be part of. It’s a simple plan, but it seems to work! As to doubling down on the ScriptRunner family, whilst this PC deal isn’t related to SR we’re always investing and pushing the state of the art here.”

And fair enough–good news for all the ScriptRunner customers. And so lets see what the analysis tells us.

This post has two components–an initial discussion about the product acquisition itself and then secondly where this leaves Appfire and Adaptavist’s app portfolios. As you read this please don’t forget that if you’re contemplating Cloud or need a partner to help with a migration we’re happy to help.

Project Configurator for Jira (PCJ) started out life as a way to copy projects from one instance to another including their configurations which is a handy utility. It later restructured/re-positioned itself as a tool that helps organizations make migrations safer, quicker, and more traceable.

Our research indicates, however, that PCJ was having a number of issues fulfilling this requirement. Firstly, PCJ has seen growth of -1% over the past year despite Cloud Migrations booming while Configuration Manager for Jira (CMJ), its main competitor in this space, has grown by 10% (CMJ is also owned by Appfire). Furthermore, versus CMJ on the Cloud, PCJ had a number of modification issues around custom field types and degrees to which various features were supported.

Furthermore, as Simon Haighton-Williams noted to us on why PCJ is no longer being offered on the Cloud and is redirecting customers to CMJ, it can be difficult to split Cloud applications up when transferring them to a different company due to shared infrastructure. In fact this works perfectly for Appfire who essentially loses a cloud competitor with now the option to move all the server/DC PCJ instances to their own better performing Cloud product CMJ.

This is great for Appfire who are in poll position to take advantage of this booming area. The Cloud Migration segment is a big opportunity and an opportunity that will only be getting larger. 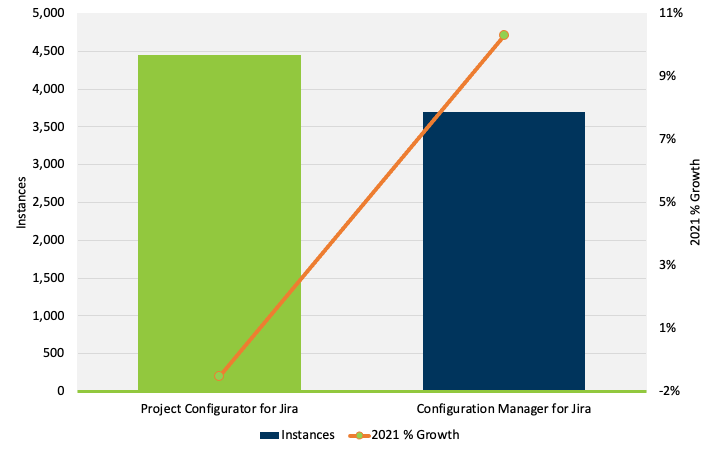 Appfire continues to expand its app portfolio with it now comprising 16% of all Marketplace instances and, even more remarkably, 21% of all paid instances. As Figure 2 demonstrates, they cover and dominate a wide range of key categories including Publishing, Administration, Planning, and Scripting/Automation while also maintaining a strong presence in Utilities, Reporting, and Integration. To note: we assign these “meaningful categorizations” to all apps with over 500 instances which compromise our 500 Club. 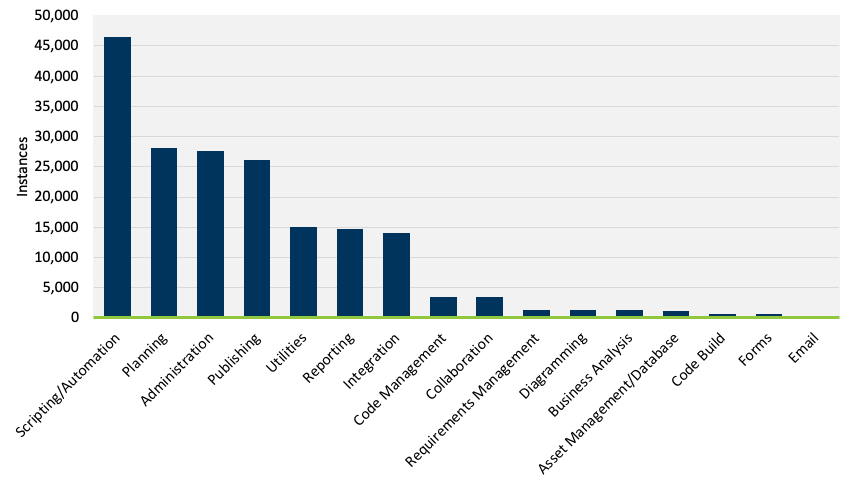 Following Appfire’s takeover of Botron in June 2020, they established themselves as key players in the Administration category by acquiring Botron’s suite of Admin apps including Power Admin, Integrity Check, and (of course) Configuration Manager. The acquisition of Project Configurator only strengthens their position here and now means that they have 50% market share (Figure 3). 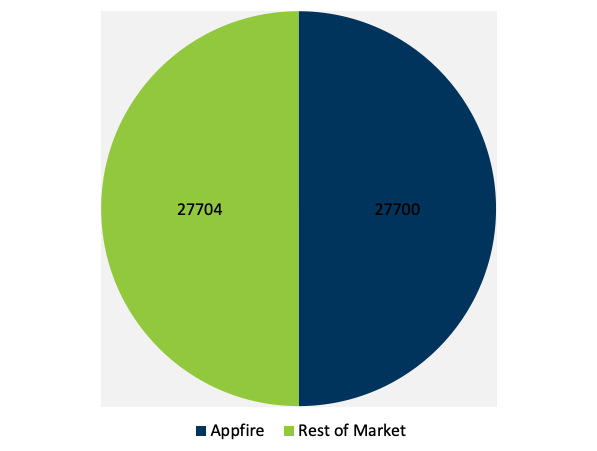 Adaptavist’s portfolio looks significantly weighted to one specific product family. Figure 4 shows that while ScriptRunner for Jira, Confluence, Bitbucket, and Bamboo combine to give an instance count of 35,000, all of Adaptavist’s other 14 apps generate 8600 together. 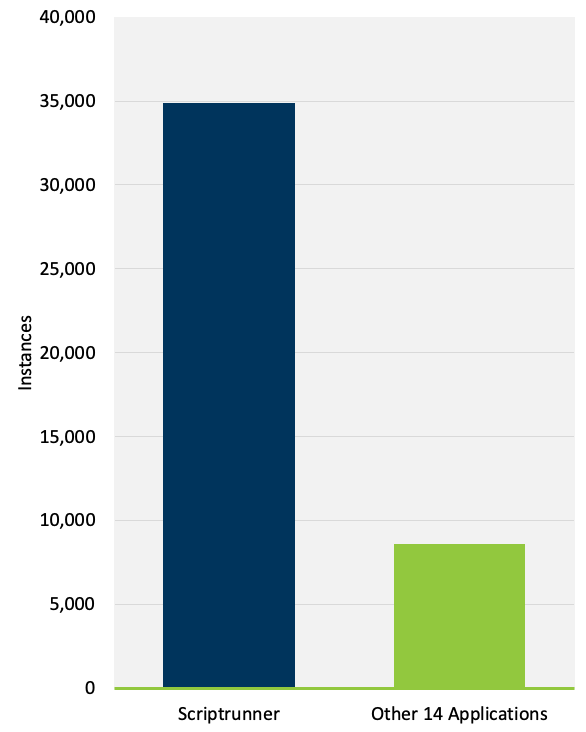 Figure 4: Scriptrunner vs Adaptavist’s other Apps

It’s also insightful looking at the growth figures for Adaptavist’s categorized apps (those with over 500 instances). While all its ScriptRunner variations are showing great growth this year (8%, 10%, and 7% for Jira, Confluence, and Bitbucket respectively) its other 4 categorized apps are all showing negative growth (Figure 5). 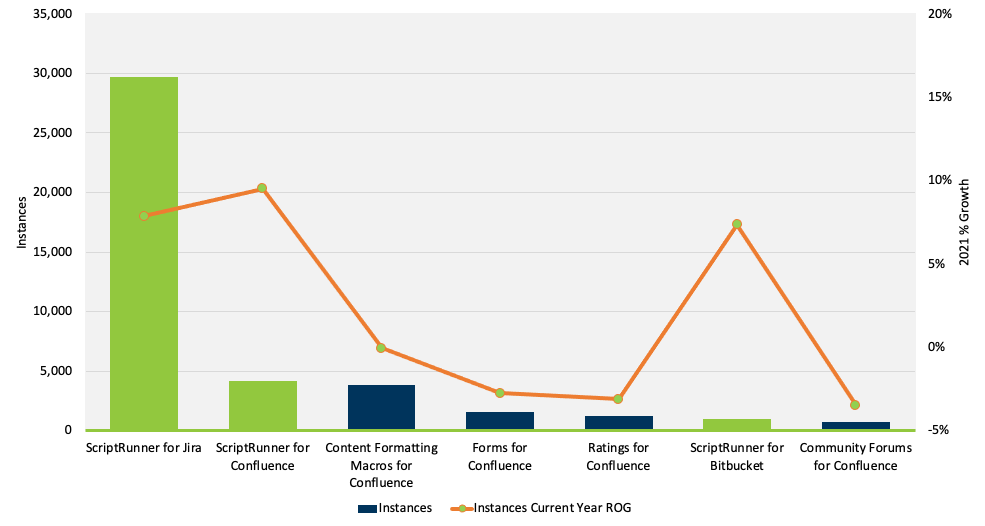 Meanwhile, beyond these 7 categorized apps the rest of Adaptavist’s portfolio is relatively small when it comes to customer numbers (Figure 6).

In terms of what this means overall for Adaptavist, the data demonstrates that ScriptRunner is their dominant product by a long way. We’re a big fan of focus in terms of application richness and so certainly as Adaptavist divests itself of other apps that will encourage and enable this focus. Given the significant size of ScriptRunner’s customer base and its very healthy growth this is surely a good thing.

We further reached out to Simon Haighton-Williams Adaptavist (CEO) and he had a number of comments on our analysis. Simon rightly pointed out that not all app sales are recorded on the Marketplace. This is true as installs behind the firewall are not recorded. However, since trials are recorded as instances we believe that these factors generally cancel each other out and don’t disrupt trend growth figures and comparisons between apps since they’re are in the same boat.

Simon also made a good point that perhaps a direct comparison to Appfire could be regarded as unfair since Appfire are very focused on developing and acquiring Marketplace apps while Adaptavist aren’t a product only company (Simon also points out that Adaptavist have non Atlassian products and Atlassian products not listed on the Marketplace). This is entirely true yet also speaks to Miles’ initial point that Adaptavist has a decision to make about potentially shifting its focus away from the app game.

You can read what Appfire has to say about the acquisition here and feel free to get in touch with us at hello@blendedperspectives.com with any questions.